Trust me: This is Everything you need to know about going to Cuba

It seems that all-of-the-sudden the world figured out the largest island in the Caribbean still exists. Maybe it was the cars, maybe it was the Kardashians.  Either way, Cuba has become a major hot spot for all the world’s coolest travel blogger Instagrams.

And now you want to go. You want the vintage picture. You want to say, “I went before it changes” (more on that later).

But, I know like many, you might not know a single thing about Cuba. Or you’re interested but you have no idea where to start.  Lonely Planet says one thing, that really awesome travel blogger says another.  Or you suddenly get caught reading  into a political battle.

And now you’re here. But, don’t worry, like we say, “Tranquilo” (calm). Here’s everything you need to know about visiting Cuba before you jump onto that plane.

Cuba is literally 35 minutes away to the closest major USA airport. From Cancun, 1 hour.   You take longer figuring out what outfit to wear for that club than it takes to get to Cuba.

Cuba’s rich history combined with its culture and of course, its disconnectivity to the world makes it alluring, mysterious and most-of-all, fun.

Plus there’s all the other amazing things like salsa dancing on the beach, drinking mojitos on the Malecon, and riding in antique cars.

If you’re American, you need one annnnddddd its complicated.  I wont get into the nitty gritty details (like I did here), but I will say:

I offer legal and hassle-free itineraries you need to make your trip legal in the eyes of Uncle Sam. But even more rewarding is that they will help the Cuban people and you’ll get to explore our culture much more than if you went to Cubano-Med (Club Med).

The visa costs around $100 and you can purchase it from Cuba Travel Services before or at check-in.  You’ll mark either “education” or “support the Cuban people” as one of the 11 categories.

Because the government of Cuba does not have an embargo on the United States, no one in Cuba cares why you’re there- they are just glad you are.  Immediately seeing your passport, they will ask you if you want it stamped. Up to you now but more on this in my other dedicated visa blog post.

In case you didn’t already know, your credit card won’t work in Cuba. Sorry, no travel points for you.

You MUST bring cash. I don’t care if you’re Canadian, Spanish, German or Martian… bring it. And lots of it.

ATMs are only seen in major cities and the only place I know that accepts credit cards as a form of payment are in hotels.  SWIPE OR INSERT CHIP HERE does not translate in Cuban.  It just simply doesn’t exist.

And to complicate things even more, Cuba has not one but two currencies.  TWO.

SO HERE’S THE BREAKDOWN: 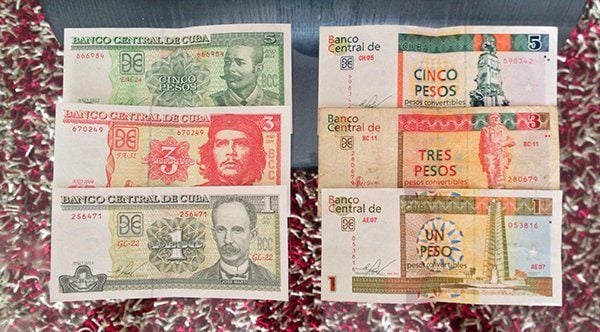 How can you tell if something is in CUC or CUP? Well, if you’re ordering a pizza from a fast food stand and the menu says “12”, put your gringo hat on and think “$12 for one pizza?” Nope. That’s CUP. So 12 peso cubano which is about half a cuc is roughly 50 cents.

MARI MUNDO TIP:  Most places in Havana will use CUC in restaurants. Anywhere outside will either charge in CUP (small places) or give you an option.

Now that you (hopefully) understand the valuation of currency, how do you get it?

SPECIAL BONUS MARI MUNDO TIP: Well, luckily for you I have amazing tips that you wont find anywhere else here that will save you a bunch of money when getting hit by the Cuban tax (especially if you’re American).

I will say that all banks will trade your currency. They are called cadecas.  The most common are: Canadian Dollar (CAD), Pound Sterling (GBP), Euro (EUR), Dollar (USD), Russian Ruble (RUB), and Swiss Franc (CHF).  Some places will also have the Mexican peso and the Japanese yen.

Be aware if you plan on going to a Cadeca, you will be waiting in line especially if in Havana (as with everything in Cuba… a line).

The biggest hurdle of daily life for Cubans is transportation.  As a tourist, it’s a bit easier, but you can easily join the Cuban club when it comes to moving around the island.

Transportation can be tricky but depending on where you are, you can still get around.

IMPORTANT: Always negotiate a price BEFORE you get into a taxi. Rides around La Habana Vieja- El Vedado shouldn’t cost more than $3cuc and to Miramar $10cuc.

And like its own intuitive uber system, prices always raise at night due to fewer cars.

Collectivos are always fijo (fixed). They run certain routes and these taxi’s cost 20 peso cubano per person per ride (or like if you took my Cuban Currency class right above is almost $1 cuc).  You can usually find colectivos where you see Cubans lined up and cars picking them up (most common for tourists is in Plaza Central across the street from Hotel Inglatera or on the corner of Copelia Ice Cream and 23rd.

The taxi driver will come up to you and you tell him where you’re going.  He will say yes or no.  You get in if obviously yes. Along the way he will pick up other people going the same direction. They come and go.

If you need a taxi from the airport to your destination (and most of you will) you can always contact me and for $30 CUC you can get yourself to your Airbnb. Cubans call buses GUAGUA for the noise it makes: waaa-waaaaaaa. There are plently of inner-city buses in La Habana but I really don’t recommend it unless you want to get extremely close to a random Cuban while sweating and not know where you’re going.  But if you’re in the mood to adventure or you’re a budget traveler, Cubans are always willing to help anyone get to where they are going. You just have to ask.

If you plan on taking a bus from city to city, tourists buses are run by Viazul. Viazul sells tickets either online or at certain stations.

A bit of caution: As with everything else in Cuba, Viazul is not reliable form of transportation. They are infamous for being late and/or breaking down.  I cant say its 100% guarantee this will happen, but something to keep in the back of your mind when going from one city to another- flexibility and a “go-with-the-flow” mentality. Tourist cars are marked by “T” on the license plate.

For the most flexibility and freedom, I always recommend travelers to rent a car especially if they want to see other parts of the country Viazul does not go through.

They are, though, expensive.  The most economic car during peak tourist season will run you almost $80 a day not including the very expensive gas.

You will also be required to get premium or special gas as all tourists cars (marked by a T on the license plate) is by law required to purchase that gas. Although, if you bat your eyes or give a little tip to the worker he might let you slide with normal gas.

You can rent cars here and prepay them with a credit card.  Please be aware that you need to rent a car for at least 3 days with a $150-$200 deposit (in cash).

MARI MUNDO TIP: If you decide to rent a car do not rent at the airport as you will have to pay a $20 airport fee and they will only give you back your deposit in your national currency with a penalty.  I suggest renting from Paseo y 3 in La Habana across the street from Hotel Melia Cohiba. They are 24 hours unlike other places.

THE MOST ASKED TOPIC: INTERNET

Ay, if I had a CUC for every time someone asked me how to get internet on the island I could fund my own internet company.

For $1.50 an hour you can buy this ETESCA card and connect to the internet following the instructions:

Want to know what applications work and will make your life much easier? I list them here.

Cubans rely heavily on inventing new ways everyday to eat.  Ration cards leave much to be desired and hardly support anyone for a week much less an entire month.

Cuba is infamously known for pork, lechon or puerco.  It’s the national dish and a staple along with white rice and beans.  Sweet potato (or bonito) and plantains are always always a side dish.

But what you know is this: Ropa Vieja.  How much I love ropa vieja.  But did you know, its illegal to kill a cow in Cuba? Yup.

La Habana has the best food by far in the island. It’s the capitol and surprisingly you can find many cuisines from around the world.   The combination of increased tourism with the uprising of private restaurants has paved the way for a new generation of Cuban cuisine.  Here are some of my recommendations in La Habana.

I am willing to put money that Cuba is by far the safest island in the Caribbean, the saftest country in Latin America and probably North and South America when it comes to violent crimes.

It is however not crime-free, of course.   The biggest thing as a tourist you must look out for is petty scams.  It happens and it happens all the time.

Tourists are EXTREMELY easy to spot.  Even if you are Cuban-American, your clothes, your attitude, your skin color, and everything about you is noticeable.  You aren’t from here.

And Cubans know that.  Many times they will trick you into going into a restaurant and you will pay more than the normal price. Or taxi drivers will charge you much more. Worst offense is confusing you with the double currency.

But, as with every other country, it happens and you cannot let it affect your vacation.  After all you should be enjoying experiencing a new culture and understand many of this is due to necessity.

Cuba does redeem itself in all other terms when it comes to safety.  As long as you aren’t a drunk idiot (screaming wheres the marijuana in the middle of Habana vieja at 2 am…. Yes, I rescued an American girl doing this last year) you’ll be safe anywhere in the island you go to.

I cannot overstate enough of friendly, welcoming and helpful Cuban people are.  You are NEVER alone or lost on the island. Never.

Throughout this blog, you’ll see many places to go.  Of course, I cannot make a website and not mention the most popular places in Havana

Those are the most common and tourist centric places in Cuba. Its where you’ll find most information on the internet and where all the other travel bloggers have mentioned in their “ultimate guide to cuba”

But, keep on the look out for some places you never knew existed. Those are the exciting ones.  And I’m so excited to show the world a Cuba its never seen before.

Want to join the discussion?
Feel free to contribute!

The Yuma’s Guide to Getting a Visa To Cuba

Critical Items to Gift or Donate to Cubans
Scroll to top